Pat was born and raised at Prince Albert, Saskatchewan.  He grew up on a mixed farm west of the city on the south bank overlooking the North Saskatchewan River.  Pat has always claimed he was "born a century too late!"  His passion for the "ol' West" has been evident throughout his entire life. He is a history buff, always eager to check out a new piece of country - not just to see it, but to talk to the locals and get a feel for their ancestors. There are few things he enjoys more than sitting around a fire, strong cup of camp coffee in hand, listening to stories about the land and it's people and animals that shaped it.

The Bliss home was the perfect setting for an artistic child and teen.  His mother, Vera,  an acclaimed artist in her own right, gave Pat the most sincere gift - the freedom and encouragement to indulge in his artistic whims: sketching; painting in all mediums; paper-mache sculpture; models; and anything that came to mind.

While his interest never wavered during his 20's and 30's there simply was no time to pursue art in a serious manner. In his early 40's, with strong encouragement from family and friends, Pat started to take art in a more serious way. He is fortunate to have worked with several excellent instructors with varying areas of interest, giving him the confidence to play and experiment on his own canvasses.

In 2005, Pat was invited to participate in the Kyla Art Group's annual show and sale. He was accepted as a full member of the Kyla Art Group and has been an active member ever since. He is also a member of CARFAC, International Equine Artist, Saskatchewan Network for Art Collecting, The Mann Art Gallery and the Mendel Art Gallery.

Pat's current body of work is primarily of horses and the land.  The perspective is unusual, most assuredly not the conventional aspect of a common subject. Know that he has lived and breathed every painting, most often on the back of a good movin' horse.  He has also added a view into his career as a Correctional Officer under the headings Prison Art and Big House Blues.

You can purchase Pat's paintings or quality reproductions of them by contacting him at graftonnorthart@hotmail.com 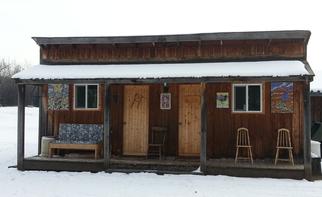